After seeing how the Maciejewski name was misspelled in German and American records, and knowing that Jan and Weronika Lewandowska Maciejewski came to America with their baby Antoni about 1884, I was inspired to again try to find the record of their arrival in the United States.

Decades ago I had tried to find their names in the series of books Germans to America, lists of passengers arriving at U.S. ports, without success. I had found my mother’s parents, grandmother, aunts, uncles, and their cousins in records from Ellis Island. However, Ellis Island did not open until 1892, and the Maciejewski family had arrived about 1884. The Szczepanski family had arrived even earlier, in 1881.

The Ellis Island website states “Prior to 1890, the individual states (rather than the Federal government) regulated immigration into the United States. Castle Garden in the Battery (originally known as Castle Clinton) served as the New York State immigration station from 1855 to 1890 and approximately eight million immigrants, mostly from Northern and Western Europe, passed through its doors.”

The Battery Conservancy now has a website with a searchable database at CastleGarden.org . Immigrant arrivals from 1820 through 1892 were indexed. I decided to try to find my Maciejewski ancestors again.

The database is much better than I had remembered from several years ago, and this time I kept at it until it worked. I tried the obvious: Maciejewski. There were 50 results, but not my family. There were 138 Jan Ma*ski, and 105 Johann Ma*ski. Six of them were in 1884, but again, not my family. I looked for Veronica and Weronika (Polish spelling) without success. Nor did Anton and Antoni work.

A search for MADREWSKI showed the family.

The Hamburg passenger manifest showed that Johann‘s occupation was Arbeiter (worker) and the family’s residence was Zynilobloth, Westpreußen. The ship Rhaetia flying under the German flag of the shipping line Hamburg-Amerikanische Packetfahrt-Actien-Gesellschaft under Captain Vogelgesang departed Hamburg 5 Dec 1883.

I was able to find a picture of the ship at the Norway Heritage site. 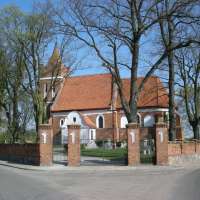