Marya was not a name usually given to Polish girls in the nineteenth century because it was considered special and unique to Mary the mother of Jesus. Girls were sometimes baptized Maryanna as an alternative. The custom was to baptize children with a single name, and that is what is found in almost all of the baptism records at St. Stanislaus Church in Buffalo, New York, in the 1880s.

Marya Magdalena Maciejewska, born and baptized 10 August 1888, was an exception.

Instead of being named after Mary the mother of God, she was given the name of a disciple of Jesus, Mary of Magdala, or Mary Magdalene. William F. Hoffman and George W. Helon, in their book First Names of the Polish Commonwealth: Origins & Meanings, explain “Supposedly seven demons were driven out of her (Luke 8:2); she was one of Christ’s most faithful followers; she was the one who found the grave empty after the Resurrection; she’s the one to whom he appeared and spoke, giving her words to relay to the Apostles (John 20:11-18).”

In her baptism record, her godmother’s name was Magdalena.

Her father died in 1896, leaving her mother with six children to raise. In 1911, Marya’s younger brother, Louis Maciejewski, got into trouble with the law for fighting, and, along with a neighbor, Bronisław Jankowski, was sent to reformatory school in Elmira, New York. The newspaper account said that Louis’ older sister, Maria, did not take it well, with the headline “Sister Falls in Swoon When Brother Receives Sentence.”

In the 1920 census, Mary Maciejewski lived with her mother Vera Maciejewski on 393 Peckham Street (they rented from Frank Szczepanski, Anthony Maciejewski‘s brother-in-law) and both she and her sister Anna Maciejewski worked as salesladies in a department store. Her niece, Sophie Maciejewski, age 11, is listed with them on the following page of the census.

In 1930, Marie Maciejewski was a housekeeper in the household of

Rev. Leonard F Dykal, a clergyman in Medina, Orleans, New York. In 1940, the priest was in California, but I could not find a record of Marie in the 1940 census.

In the 1950s and 1960s Marie lived with her sister Ann on Briscoe Street in Buffalo, New York. She had changed her name, because her Social Security record identified her as Marie Mack upon her death September 28, 1970. 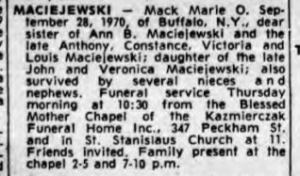 Her obituary in the Buffalo Courier Express had her birth name Maciejewski as well as Marie O. Mack. She was buried alongside her mother and sister in St. Stanislaus Cemetery in Cheektowaga, New York.