Wincenty Kapuściński ‘s marriage recorded in 1887 said he was “a bachelor, a farmer, twenty five years old, son of the late Kazimierz and Regina nèe Zybała.” But I had been under the impression that his mother’s name was Witoń, from an earlier index entry. It raised more questions.

I tried to follow the document trail, and in Koprzywnica, there was a 1852 marriage (entry 16) for Regina Zybała, the daughter of Kacper and Jadwiga Zybała, to Szymon Tomczyk, the son of Bernard and Agnieszka Tomczyk:

and a 1853 marriage (entry 32) for Regina Tomczyk, the widow of Szymon Tomczyk, to Walenty Witoń, the son of Tomasz and Regina Witoń: 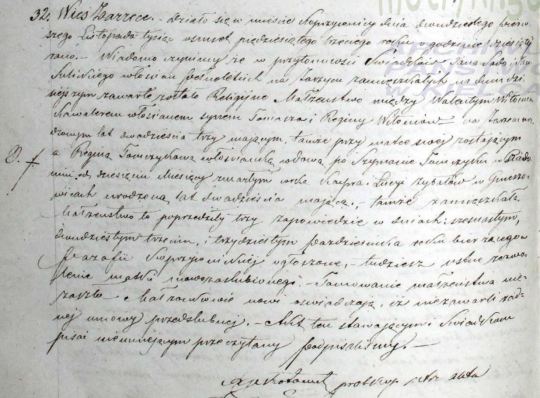 before the 1857 marriage (entry 10) of Regina Witoń, the widow of Walenty Witoń, to Kazimierz Kapuściński, the son of Florian and Franciszka Kapuściński:

I did not find a record of Szymon Tomczyk‘s death, or of any children from Szymon and Regina‘s 1852 marriage.

After their marriage in 1853, Walenty and Regina had a daughter, Franciszka Witoń, born in 1856, entry 30 in the Koprzywnica register. Unfortunately, there is a death record for Walenty Witoń later that same year at entry 82 in Koprzywnica.

In 1857, 24 year old Regina married a younger man, 19 year old Kazimierz Kapuściński. The couple had the following children in Koprzywnica, several of whom did not survive their first year:

Kazimierz Kapuściński died in Koprzywnica in 1881 (entry 36) at about age 44. 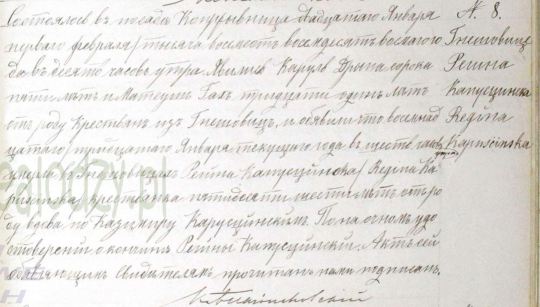