My, how the family has grown! Marcin and Anna Szczepański had six children after coming to the United States in 1881. Five of these children had an average of seven children each, giving Marcin and Anna 35 grandchildren. Our father had 8 siblings, and 26 cousins from his mother’s side of the family. That’s a lot of people!

Of course, most of those children had children, and they are our siblings, first, and second cousins. All told, there were 106 of us in this generation. Unfortunately, a few died as babies and some have died in adulthood:

From 1929 to 1972, there were babies born to this generation almost every year: 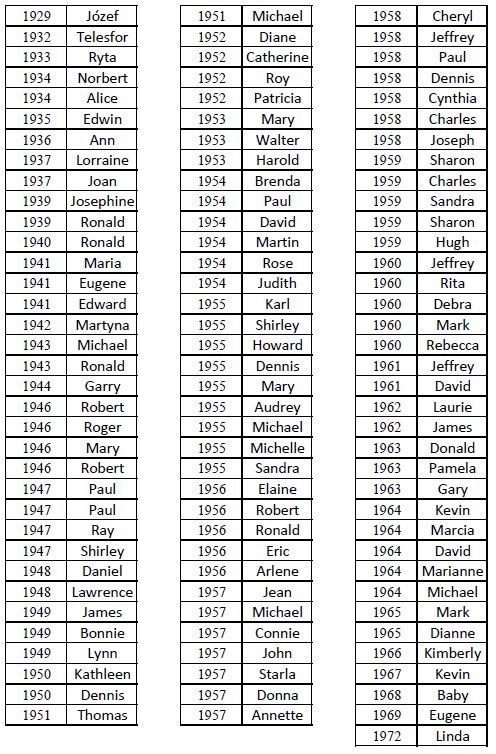 Since I still had some of my old books about the Descendants of Martin and Anna Szczepański, I recently sent letters to 83 descendants whose addresses I was able to find in internet directories. A few I was unable to identify, especially in cases where more than one person of the approximate age used a similar name. I asked that families talk to each other and let me know if anyone would like a copy of the book. I have a limited number of copies left, and I would like to see them all in good homes!

Although the data is not complete for the next generation, there were at least 169  children born between 1954 and the early 2000s. Michael was the most popular name, with 7 boys named Michael in the Wopperer, Wojciechowski, Mathews, Brimmer, Maciejewski, Voytovich, and Slawson families. Brian, James, Jeffrey, Mark, and Paul each had 4 boys with those names. Girls’ names were more diverse, although there were 3 girls with each of the names Emily, Jennifer, Mary, and Tanya. Here is the the list of names in the 5th  generation from Marcin and Anna and the frequency with which they occurred: 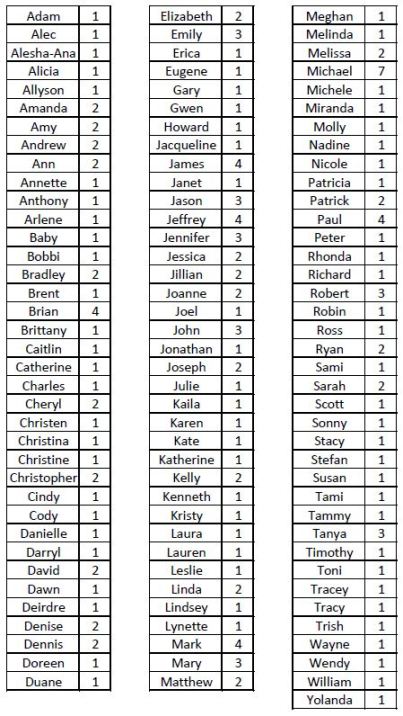 Please let me know if you have updates to the list!