I find genetic connections fascinating. They are clues, like anything else, and need research and documentation. I recently reached out to a DNA match on Ancestry.com. Although we were only distantly related, with 9.6 centimorgans shared across 1 DNA segment, we both had the Kapuscinski name in our family trees and ties to Buffalo, New York. I wanted to learn if we shared common ancestors, or could identify a place where our common ancestors had been.

His ancestors were also identified as Kapusta. Although I knew that Kapusta and Kapuściński had the same root word, this was the first family I had seen using both versions of the name.

It was not surprising that there could be different versions of the same Polish name. The Polish language changes words to indicate gender, number, and case. For example,

So the same root name can have various endings, depending how it is used by a Polish speaker. For more about Polish names, see https://en.wikipedia.org/wiki/Polish_name.

My grandmother Agnieszka Kapuścińska was born in February 1895 in Gnieszowice, Koprzywnica, near Sandomierz in Russian Poland. Now it is in the Świętokrzyskie province of Poland. Her sister Maryanna had come to the United States in 1912, and paid for her sister’s ticket the following year. Maryanna married Grzegosz Mastykarz in 1915, and Agnieszka married Jan Skrok in 1917. While I had previously identified my grandmother’s ancestors, and had been able to trace the sisters, I did not know of any other relatives named Kapuściński in Buffalo, New York.

However, I found Casimir and Mary Kapuszcinski in Buffalo, New York, in the 1930 United States Federal Census, at 73 Gibson Street.

In 1940, Casimir and Mary Kapusta were at 37 Lombard Street, in Buffalo, New York.

The older children had been born in Ohio, which made me look for information there. I found the 15 Sep 1928 marriage record for Kazimir Kapusta and Mary Staron, born Obora. Both had been previously married, and had been divorced, in Cleveland, Ohio.

In the 1920 census record, Casimer Kapusta was a lodger in the home of Walenty and Mary Starol [sic] at 3472 East 76th Street in Cleveland, Ohio.

The children of Kazimierz Kapusta and Maryanna Obora born in Buffalo, New York, were

Genevieve/Jean‘s grandson was my DNA match, so I wanted to see if we could find where in Poland his great-grandparents had been born, and if there were any links to my identified ancestors. We exchanged information on his other grandparents, but I was most interested in his Kapusta and Obora lines from Russian Poland.

Kazimierz‘ 1918 draft registration identified him as a “frendley alien” born in 1894 in “Bialobozie, Kelecska, Russia.” (Already, spelling is suspect.) Because I knew where my Kapuściński ancestors were from in the former Kielce province, it helped me to find Białoborze.

Wikipedia says “Białoborze is a village in the administrative district of Gmina Stopnica, within Busko County, Świętokrzyskie Voivodeship, in south-central Poland. It lies approximately 3 kilometres (2 mi) north-east of Stopnica, 18 km (11 mi) east of Busko-Zdrój, and 55 km (34 mi) south-east of the regional capital Kielce.”

A search on the Geneteka database for Kazimierz Kapusta in the Świętokrzyskie province showed that Kazimierz Kapusta  was born in 1894 in Białoborze to Jan Kapusta and Katarzyna Sikora, which matched the information on his marriage record. He was baptized (entry #66, according to the Geneteka index) at Kościół św. Apostołów Piotra i Pawła in Stopnica, not far from the area near Sandomierz where my Kapuściński ancestors were found. The Polish records were indexed, but I did not find the records themselves online.

From Geneteka, I could see Jan Kapusta and Katarzyna Sikora had these children in Białoborze. Unfortunately, the first boy, named Jan, died in 1891.

Further research on Geneteka showed that 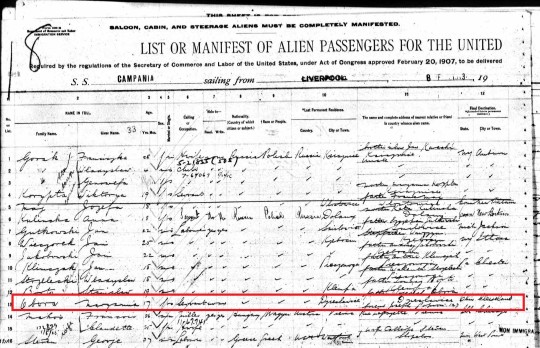 1913 Manifest for the ship Campania from Liverpool, England, to New York, New York

Maryanna Obora immigrated on 17 Feb 1913 to New York, New York, United States, on the ship Campania from Liverpool, England, with a final destination of Cleveland, Ohio. Her place of birth was listed as Dzieslawice in Russian Poland.

Wikipedia says “Dziesławice is a village in the administrative district of Gmina Stopnica, within Busko County, Świętokrzyskie Voivodeship, in south-central Poland.” Often immigrants who were married in the new country had previously known each other or each other’s families in the old country, as was the case here. Again, Geneteka was useful.

Marianna Obora was born in 1896 in Dziesławice to Wojciech Obora and Marianna Pyrz. Again, this was very close to the information on her marriage record. She was baptized (entry #256, according to the Geneteka index) at Kościół św. Apostołów Piotra i Pawła in Stopnica. As before, the Polish records were indexed, but I did not find the records themselves online.

From Geneteka, I could see Wojciech Obora and Marianna Pyrz had these children in Dziesławice. Sadly, the records say that Stanisław [sic] died in 1900 and Antoni in 1905.

Further research on Geneteka showed that

Our DNA connection is very small, and we do not have any common matches, so I was not surprised my DNA match and I did not find common ancestors in a few generations. But our forebears came from the same region, and I was able to put my prior experience with Geneteka to good use in identifying the ancestors of one of the grandmothers of my DNA match. Even genetically distant cousins can collaborate and share information to help one another find out more about their ancestors!