In the town of Koprzywnica in Poland between 1881 and 1910 (the last year available), http://www.geneteka.genealodzy.pl 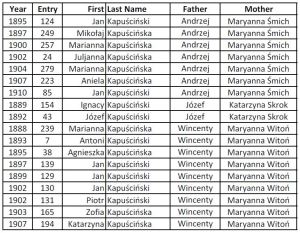 Not all of the babies survived, and it appears that occasionally a name would be reused for the next baby of the same sex. 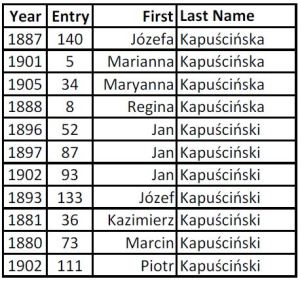 Geneteka shows eleven Kapuściński deaths were recorded in Koprzywnica for the years 1881 to 1910.

It’s interesting that Józefa Kapuścińska‘s birth was not recorded, although it is likely she was born between Marianna’s birth in 1888 and Antoni’s birth in 1893.