Primary sources are contemporaneous. This is what just happened. They are recorded very near to the time of an event by people with actual knowledge of the event.

Secondary sources are what was said, recorded, indexed, or compiled about what happened, usually after an event.

Both can have errors, but primary sources are more likely to be correct. For example, birth records are usually correct as to date of birth, and death records as to date of death. However, death records can be wrong about other things, because the information is provided at a stressful time.

What we look for in recording family history is a “preponderance of evidence.” Do the stories hold together? Are they consistent across time and place? What is the source? How reliable is the source likely to be? How motivated is the recorder to get it all right?

As an example, my father, before he died in 1995, told me about his father’s brother, his uncle “Gust Warner.” He told me that Gust‘ son Daniel had married and moved to Kenmore. I recorded what my father had told me, but was limited in my ability to verify his recollections. I researched baptism records and learned that his uncle had been baptized Konstanty Maciejewski. I checked out marriage records in Erie County and found that Constantine Maciejewski had married Mary Kajdasz. I looked at the telephone directory, and it was full of Warners. It would be difficult to contact them all.

Twenty years later, I was able to find out more. The 1930 federal census showed Constantine, Mary, Daniel, and Mary‘s mother Jadwiga Kajdasz living together in Buffalo. It was the right marriage record! The 1931 city directory showed August and Mary Warner at the same address. The same people, but using different names, just as my father had told me! When it happened again in the 1940 census, and the 1942 city directory, I was more sure. When I learned that Gus is a recognized nickname for Constantine, it became even more likely.

Then Daniel was not with his parents in the 1940 census, but there was only one Daniel Warner of the right age in the 1940 census in New York. He was newly married and living in Kenmore. To be honest, I had not remembered what my dad had said, but I had written it down. When I reread my note after seeing the census record, I knew I was on the right track.

Then I saw that Daniel Warner had served in the military in World War II, and his widow had applied for a military headstone, to be shipped to August Warner, establishing a definite connection between August and Daniel Warner. I found a New York State record of August Warner‘s death, and saw that he was buried in the same cemetery as his son. Mary Warner‘s obituary listed her original name as Klein, but everyone else matched, which makes me think that there might be other Kajdasz relatives also using the surname Klein.

Any one of these records, by itself, would not prove much, but together they paint a picture of a family. I am looking forward to learning more about the descendants of Daniel and Doris Chandler Warner.

I plan to ask them if they remember that their grandfather was missing the second finger off to the first joint of his left hand. That would clinch it. 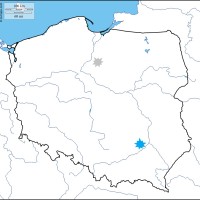 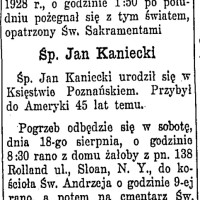