I was surprised to learn my great-grandfather renounced his allegiance to the Emperor of Germany when he became a citizen of the United States in 1887. I knew he was Polish! This is where the history part of family history becomes important.

The country of Poland did not officially exist when many of our ancestors immigrated to the United States. The Polish–Lithuanian Commonwealth had been partitioned by the Kingdom of Prussia, the Russian Empire, and Habsburg Austria in 1772, 1793, and 1795. Ethnically Polish immigrants were listed with German, Russian, or Austrian nationalities in the records, and their places of origin were given with Polish, German, or Russian names. The Latin versions of the place names were listed in Roman Catholic church records. These are research challenges.

Here is a Prussian map from the late 1800s, with the areas that with a few boundary changes, became officially part of Poland after World War I and World War II:

While my father’s ancestors came from West Prussia, allied families identified as German came from East Prussia, Silesia, and Posen.

Posen was the German name of the provincial city as well as the Prussian province. The province of Posen was divided into two government regions (Regierungsbezirke), named Posen (Poznań) and Bromberg (Bydgoszcz). These regions were again subdivided into districts called Kreise, similar to counties.

Kreise of the Prussian Province of Posen in the 19th Century

Of course, these districts had both German and Polish names. The following is a list, with links, from Wikipedia.

A search for places of the old German Posen province at Kartenmeister.com lists 12,936 entries, including duplicate and alternative spellings for villages, cities, and towns.

This region was historically known as Wielkopolska, or Greater Poland (Großpolen in German). The major city is Poznań. There is considerable overlap with the present-day Greater Poland Voivodeship, województwo wielkopolskie in Polish.

Historical boundaries of former Poznań and Kalisz provinces of Wielkopolska, or Greater Poland, in the boundaries of current Poland

In the twenty first century, Poznań is both a city and a powiat (county) in the Greater Poland Voivodeship. Powiat Poznań  contains the towns Swarzędz, Luboń, Mosina, Murowana Goślina, Puszczykowo,  Kostrzyn, Pobiedziska, Kórnik, Buk, and Stęszew. Each of the towns is associated with about a dozen villages, some which are identified on the map below. 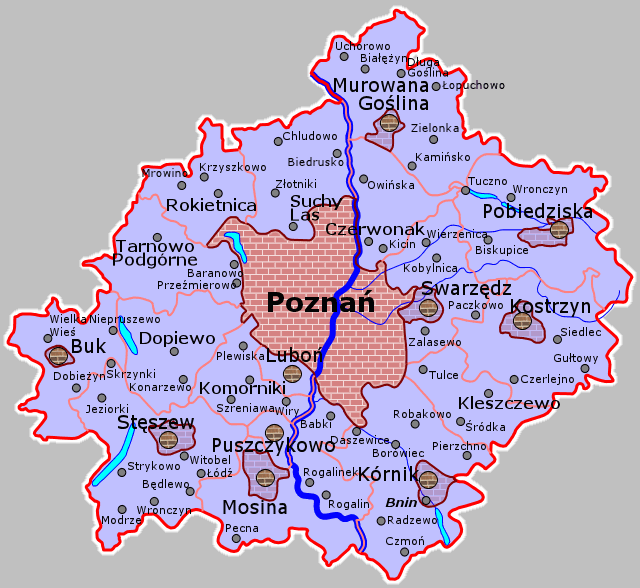 Immigrants who said that they came from Posen may have been referring to the city, the nearby villages or towns, or the German province. Although the Poznan Project has been very helpful in indexing marriage records from the German province of Posen/Poznań from 1800 to 1899, it is not complete. Volunteers at Projekt BaSIA are currently indexing many records from this area. Other German and Polish place names can be found on Kartenmeister.com, as well as on old and contemporary maps. While their results are available at no charge, please consider volunteering or donating to these efforts if they can help you in your research.