Church records were very helpful in researching the ancestors of two of my fourth cousin DNA matches from Ancestry.com. Their great-grandmother, Katarzyna Kiersznowska Niewirowska was born in Groß Schönbrück/ Szembruk, the same place that my great grandparents Marcin Szczepański and Anna Kalinowska were from!

It took awhile longer to find the records for their great-grandfather Franciszek Niewirowski mostly because there is no place called Szennato.

Franciszek Niewirowski, young man (Polish młodzian), 22 years old, has been in Chicago 1.5 years, and lives Blackhawk Street No. 78. He is the son (Polish syn) of Józef and Maryanna Brzozowska. He was born (Polish urodzony) at what reads like Szennato. (Czytać is the Polish verb “to read.”)

Katarzyna Kierznowska, young woman (Polish panna), 19 years old, has been in Chicago (illegible) No. 199. She is the daughter (Polish córka) of Ludwik and Ludwika. Her place of birth is listed as duży Szömbrug.

Aware of chain migration, I was looking for information about Franciszek Niewirowski while researching Katarzyna Kierznowska and her mother Ludwika Kalinowska in the Szembruk church records.

In the Szembruk records, I found an 1875 entry for the death of Elżbieta Trever, a daughter of Franz and Marianna Niewirowski, which indicated there were Niewirowski family in the area. Elżbieta is Polish for Elizabeth. She died in Garnseedorf, which had a Lutheran, but no Catholic Church. (It was across the nearby border, which remained German after WWI, according to Wikipedia.) I researched Kartenmeister.com, and saw that the Polish name was listed as Szlemno, which might have been very loosely recorded as Szennato. I also saw the associated Catholic parish was Groß Schönwalde in Kreis Graudenz. The border is visible in the old and new maps below. 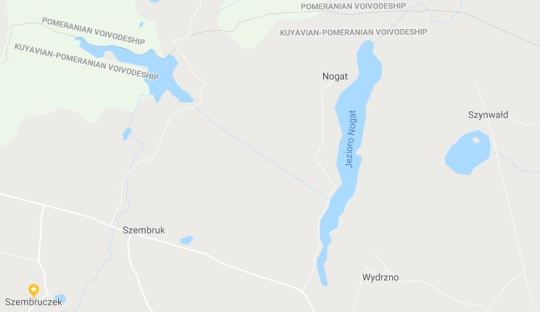 In Polish, Groß Schönwalde is called Szynwałd. In a straight line, it is about four miles from Szembruk. The Szynwałd church is Kościół Narodzenia Najświętszej Maryi Panny (Nativity of the Blessed Virgin Mary).

However, while looking through the pages, I saw several entries that looked like Szynnato, so I thought that there might be a village with that spelling nearby.

After looking in vain for a nearby village called Szynnato, I went back to the original record and saw that what I was reading as Szynnato was actually “nw,” not “nn,” (the W sounds like a V) the letter “ł” (L with a line across it, pronounced like a W sound), not “t,” and “d” with the squiggle over the letter going back to make a line over the “l”, not “o.” In short, it’s Szynwałd in cursive.

Going back to the Chicago marriage record, I could now read Szenwałd. It is not exactly Szynwałd, but it is close.

[1] When the church records were filmed in 1954, Szynwałd (Grudziądz) was in the Bydgoszcz province of Poland. During the German Occupation of the 19th century, it was Provinz Westpreußen (West Prussia), or Prusy Zachodnie in Polish. After Poland was reunited in 1920, it was in the Pomeranian Province, and between 1975 and 1998, it was in the Toruń Province. Currently, Szynwałd is in the Kuyavian-Pomeranian Voivodeship, or in Polish, województwo kujawsko-pomorskie.

A Tale of Two Families