With a family name of Maciejewski, I always identified as having 100% Polish ancestry. An analysis of my family origins shows that, as expected, most of my genes are associated with Eastern Europe. Both AncestryDNA.com and Family Tree DNA show 6-7% from Irish or British Isles extraction. Family Tree DNA indicates that 3% of my ancestry is from Central Asia, the land of the Tatars. 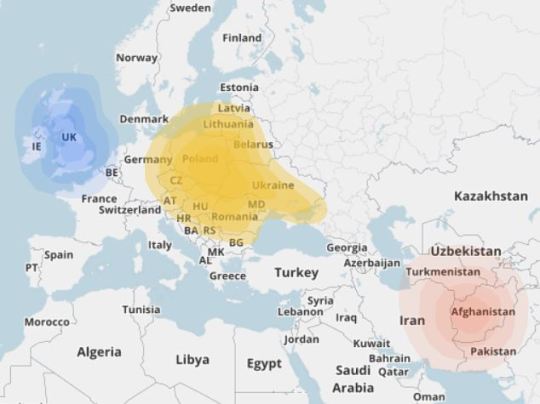 The majority Eastern European link is obvious. The Irish/British Isle link was a surprise. My original theory was an ancestor who traveled to Poland, as described in British and Irish Experiences and Impressions of Central Europe, c.1560–1688, by Dr. David Worthington, and other books describing how Irish, Scottish, and British diplomats, soldiers, religious, and scholars lived and worked in Poland. There are thirteen places in Poland called Skotniki, presumably because they were settled by people from Scotland.

As more people tested their DNA worldwide, some of the correlations between people were better understood. Although the British Isles are separate from the rest of Europe, there were numerous Celtic settlements throughout Europe in the middle ages. Many European people and their descendants share trace DNA markers with the reference population from Ireland, Scotland, and Wales.

Another possible connection might be in Koprzywnica, on the road between Kraków and Sandomierz. In 1185, Prince Casimir II the Just brought in Cistercian monks who established a monastery and church of Saint Florian in Koprzywnica.

The original church was destroyed in in 1241, when invading Mongols burned the village and the monastery buildings and murdered the monks. There were more Tatar invasions in 1259 and 1260 and Koprzywnica was plundered and burned again. These invasions of Poland are the most likely explanation for my 3% ancestry from central Asia, or possibly it was from later incursions from the Crimean Tatars, descendants of the Mongols.

The Polish National Tourist Office explains the current appearance of the monastery and church, as they appeared when I visited this area in 2004:

History was not kind to Koprzywnica, so the Church and the monastery complex bear the marks of numerous reconstructions and renovations carried out in line with the later architectural styles.

Romanesque Church built of stone has built Gothic tops made of brick and vestry, chapel, the western facade with a porch and bell tower added in the Baroque period. The cross-ribbed vaulting and Gothic paintings are very impressively presented throughout the Church. The Romanesque chapter house with a cross-ribbed vaulting is particularly noteworthy in the monastery. Vaulting ribs run down to columns and wall brackets in the middle of the hall. The chapter house holds a lapidary. The end of Cistercians in Koprzywica was due to dissolution of the monastery in 1819. Since 1821, it has remained a parish Church. Next to the Church and the monastery there is a former prior house founded by abbot Zbigniew Ossoliński in 1615-1620. Traditionally it is known under the name of the abbot manor.

Around Koprzywnica in pre-Christian times there was a very strong centre of fire worship. Now, on the site of the pagan temple there is a spectacle of “light and sound”, i.e. performances of the local fire department. Each firefighter, led in procession by the pastor, spits out kerosene towards the burning torch, which makes a few feet long pillar of fire. This happens at night, on Holy Saturday, after the resurrection (not like in the Catholic rite on Sunday).

Some of this history was alluded to by our mother when we were growing up. Although a staunch Roman Catholic, she had an interest in traditional Polish rituals. There is actually a Polish word for having both pagan and Christian beliefs: “dwojwierny,” meaning two faiths. She also said that Polish parents looked for almond shaped eyes in their children because of their Asian forebears. Not knowing the history, I thought it was just a story.

As a young girl our mother gave me a family legacy as befit people descended from a land that was so often invaded. She solemnly told me that others might be able to take away my things, but they would never be able to take from me who I was and what I had learned, the knowledge I had in my head. She actually held my head as she talked to me about it. I think that is why our mother’s family valued learning over material possessions, and why I am motivated to discover more about our history and to tell these stories.

They Came from Będzin!