Getting Back Into Family History Research

Our father’s families came to the United States in the 1880s. Antoni Maciejewski married Marya (Marie) Szczepańska in 1907 and they had 9 children. The youngest boy was our father, and I had lots of aunts and uncles and cousins. I found it hard to keep track, especially since our parents were about the same age as many cousins. Since the cousins were adults, with kids the same ages as my sisters and me, we called them the honorific “aunt” and uncle.” It was polite, but confusing.

Our mother’s family was even more confusing. In addition to first cousins, many of the extended family would get together at holidays, weddings, and funerals. I knew that Mary Mastykarz and my grandmother were sisters, but did not understand how we were related to the Solowski family. I had met several Kiec relatives, but were they our mother’s cousins or step-siblings? (Both, I later found out!)

I worked with computers, so in 1991 I used a DOS-based computer program called Brother’s Keeper to make sense of it all. Initially, I “only” wanted to document what our parents knew of my Canadian-Irish-Yankee husband’s and my Polish families. Well, one thing led to another, and we were traipsing through old New England graveyards, researching in town vaults and state/provincial archives, and ordering microfilms from the LDS library. I worked for a bank that had a data center in the old Albany train station, and I had to go there several times a year. When I could, I would spend extra time in the New York State Archives. When I visited family, I went to the Clerk’s Office in Buffalo City Hall, Erie County Hall, and the Public and Historical Libraries in Buffalo for original and microfilm records. I researched at the National Archives in Waltham, Massachusetts and Washington, DC. I was excited about finding things out, but not always careful about documenting where and when I found the information. 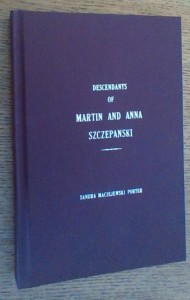 I wrote letters to close and distant family members, and learned a lot about my father’s mother’s family. In 1997, I published a book about the Descendants of Martin and Anna Szczepanski. The internet was just getting started. I was able to use WordPerfect for formatting, bought acid free paper with the right grain and an LED printer for the pictures, paid a printer to make black and white copies of the other pages, and, once the pages were assembled, found a bindery to glue it together. The gold lettering on the front and spine of the book was a bonus, because the binder had been using gold paint for a commercial run, and continued it with my book. The whole project was expensive, but rewarding, and I asked relatives to help defray some costs. I created a website, but coding in html was a pain. (I sound like an old person: “You kids have it so easy now, with internet research, easy websites, on-demand publishing, etc.”)

After the book was printed, I was asked “What about the Maciejewski side of the family, especially Great-Aunts Dorothy, Marie, and Ann?” Well, there was not much to tell from a family history point of view, because they never married or had children. However, I never got much information about their brothers Konstanty and Ludwik. They were in the St. Stanislaus RC Church baptism register. I tried calling and writing, but the trail grew cold.

Work and family took up my time for decades. Intermittently I tried recovering the database using Ultimate Family Tree and The Master Genealogist, but information and sources were missing. I knew there were online databases, but I hesitated to post incomplete information. I had seen how inaccurate information persisted for decades in DAR genealogies. Still, I had the book and old backups.

In 2014, events nudged me back to family history. I received calls from relatives I had not talked to in years. I started going through old papers and found some of the original source material. I found the most recent iteration of the database, and was able to load it into RootsMagic. Some of the places and sources were incomplete, but I still had the people. I started cleaning things up and looking online.

And I found a family tree that looked like a match! Our second cousin had documented her family history on Ancestry.com, and although she was a little vague about the Maciejewski siblings and their birth order, her grandfather was Louis Warner! She was able to share information about her branch of the family, and I was able to share the Szczepański book and fill her in about ours.

Comments on: "Getting Back Into Family History Research" (1)