When I first started looking at our family history, I erroneously thought that our maternal grandmother’s family had come from Będzin, Poland. There were a few reasons for that. Pre-internet, we had to look at maps and gazetteers, so it was easy to make a mistake. A photographer from Będzin was listed on the back of a photograph. (Was the family traveling, perhaps?) A second cousin thought the family came from that area. I thought Uncle Ted was born in Sosnowiec, and Będzin is next to Sosnowiec, so it seemed close. A cousin’s son had a boy with the last name Benzin in 1988, so the name was familiar.

Other evidence pointed to the correct location, including a letter that our grandmother had received from her sister after World War II. But the word was out, and the belief persisted.

Będzin is both a rail hub and the intersection of two national roads – the 94th (Zgorzelec-Kraków), and the 86th (Katowice-Warsaw). The area that our mother’s families are from is along the Wisła, or Vistula River, between Krakow & Warsaw. Both areas are considered part of Małopolska, or Little Poland. If you read James Michener’s book Poland, it is set on the other side of the river from our grandmother’s birthplace. I used the novel to plan my driving itinerary on my trip to Poland in 2004. 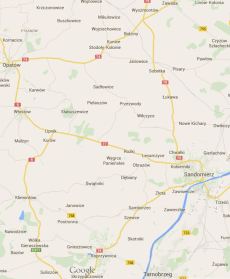 One of my stops was the archives in Sandomierz, where with halting Polish, I verified grandmother’s place of birth. Before my trip, I had shared a map with cousins showing the ancestral villages identified from old records.

The regional capital is Kielce, and since 1999, the province is called Świętokrzyskie Voivodeship after the Holy Cross mountain range.

That’s the way research goes. You check the records, you make a hypothesis, you test it, and you report the results. You make progress, even if your proposal was incorrect. As Edison is to have famously said, “Results! Why, man, I have gotten a lot of results! I know several thousand things that won’t work.”

Comments on: "Correcting a Mistake" (2)